All change in the DoE! 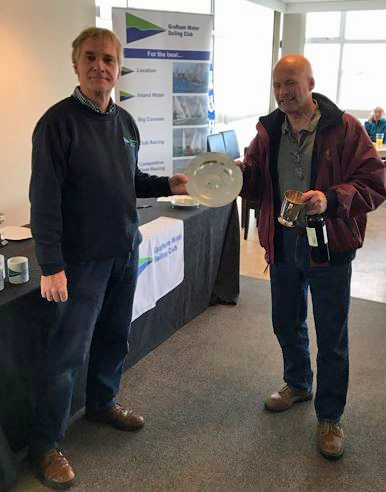 The entry (47 boats) was encouraging – just two down on last year – and the racing was typically competitive throughout the fleets.

Racing started on-time in around 15 knots of northerly breeze. PRO Peter Saxton set a trapezoid course, using special marks for the windward and first reach. Both reaches were tight, to the delight of the D-Zeros and Lasers and to the occasional discomfort of the lighter FF crews.

Race 2 was another trapezoid, with some changes to the mark placement (to accommodate a wind swing to the right) and to the downwind marks (in an attempt to open up the first reach). No sweat for David Summerville – another 1st place in the bag!

After lunch, the wind dropped closer to forecast 8-9 knots and the PRO responded by setting a shortish windward-leeward track, with a leeward gate downwind of the Committee Boat. David Maclay promptly claimed top spot and the Fifteens (Mark & Ben Longstaff and Julian Clarke / Colin Burns) began to look more of a threat.

The final race was a figure-of-eight. As the breeze softened, it became possible to fly spinnakers on all three downwind legs, giving us some much-needed gybing practice!

Altogether, a challenging day for competitors, and race team – including the ever-efficient mark layers. If you didn’t make the event this year, look out for the advance publicity for 2017 and get the date in your diary!