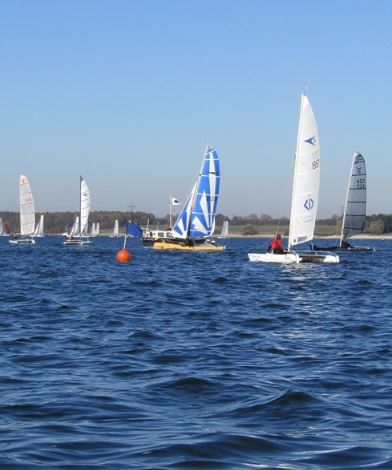 70 catamarans took part in the Grafham Cat Open which happily (after the storms of last year) took place on a sunny weekend in a force 2-3 light Southerly breeze. There were 18 Club boats taking part. The following is a summary of the results.

The Fast Double handicap class had 21 entries including 10 Formula 18s. The F18 of Simon Northrop and Caleb Cooper from Minnis Bay were the winners (1,1,1,1,1) and top Grafham sailors were John Sweet/ Olly Dwight 4th and Tony Stokes/Sam Curtis 5th. The youth contingent in their Nacra 15s fielded 6 boats and the winners were Theo and Jasmine Williams from Restronguet. Nacra 15 Runners up were Abigail Clarke/Alfie Cogger from Grafham. Other Grafham Nacra 15 places were: Megan & Will Smith 3rd and Abigail Clark/Alfie Cogger 4th.

The Fast Single handicap class was once again won by the Shadow X of Robin Leather (Gurnard) who won all 6 races.  The top A Class sailor in second place overall was Peter Boxer of Clacton. Cat Fleet Captain, Neil Klabe of Grafham was 4th.

The Club was a buzz for the whole weekend and the sailors enjoyed an excellent dinner and a drink in the bar at the Club on Saturday night. Thanks go to Lisa and Co for an excellent meal.