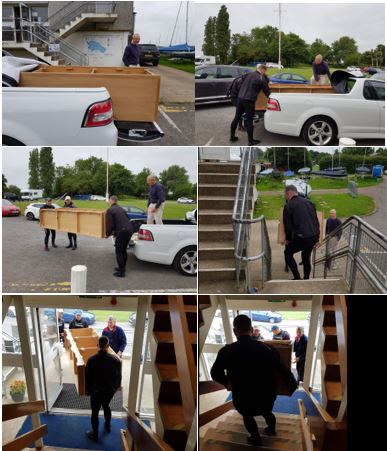 Fortunately, it being a first Tuesday (and therefore Working Party day), there were plenty of able-bodied people around to manhandle the 8 foot long, solid wood lower section off the back of Bob’s truck, up the front steps and up the stairs of the clubhouse.

Unfortunately, however, when the first landing was reached, the furniture-shifters found that the ceiling clearance was only 7 feet. No way was an 8 foot long construction going round that corner!

Various possibilities were considered: would it go through the gap in the banister, would taking the door off the Gents’ help?

But reluctantly all agreed that another solution must be found. “The Fire Escape” cried several people. 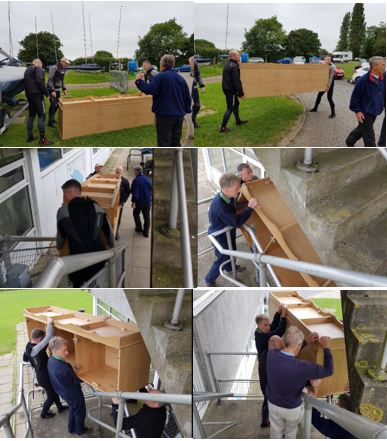 Whilst the west-side fire escape door was being opened, the gallant team, with some enthusiasm still remaining, carried the cabinet to the bottom of the east-side fire escape where they were wondering why no-one had opened the gate or the door at the top.

Luckily they were quickly redirected to the other side of the clubhouse and managed to manoeuvre the increasingly heavy cabinet around four 180 degree corners.

Finally the top deck fire door was attained. Would it be wide enough for the cabinet to pass through?

Fortunately they did not have to carry it all the way back down again and it was installed in its final resting place. #thisgirlcan participants, waiting for their coach who was directing operations, cheered enthusiastically as they realised that there would be sailing this morning after all.

Many thanks to the furniture removal team! We know who to call when the top section of the cabinet arrives.