The Notice of Race is the formal statement of the rules and conditions under which racing takes place. The Notice of Race may differ between series so a new version is published shortly before each series begins.

The Sailing Instructions detail the arrangements to be adopted for conducting races. Again, because detailed arrangements may differ between series, the instructions that apply to the current series are published shortly before that series begins.

Club racing uses a combination of fixed marks and ‘special’ marks that are laid on the day in locations that optimise racing. Special marks are sometimes large inflatable (yellow or orange) buoys but may also be small Dan buoys, which carry a coloured flag. See the Sailing Instructions for more detail. Click on the map below to show the location of the fixed club marks. You may download here a printer-friendly version of the same map. 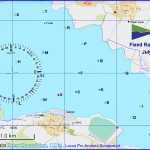 Finishing procedures are common to all Club racing (with the exception of pursuit races). The finish of races takes place, following a signal from the Race Committee to shorten course (Flag “S” displayed from the Committee Boat. The procedures are summarised here and are detailed in the relevant Sailing Instructions.

List of handicaps used in Club series racing (based on the Great Lakes Handicapping System).