Thomas Sandal of Grafham is the new Sprint 15 Inland Champion. Storm Brian caused the Grafham Cat Open to be cancelled but the Sprint 15 Inland Championships went ahead on Sunday 22 October.  Many were put off by the forecast but 9 took part in a force 5-6 Westerly (a bit better than the forecast). Race officer, Nigel Denchfield, set a trapezoidal course and ran 4 races back to back in rapid succession.

Thomas Sandal won with a first and 2 second places. Kevin Cummerson, also of Grafham, was 5th. 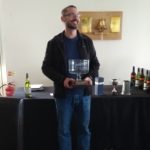