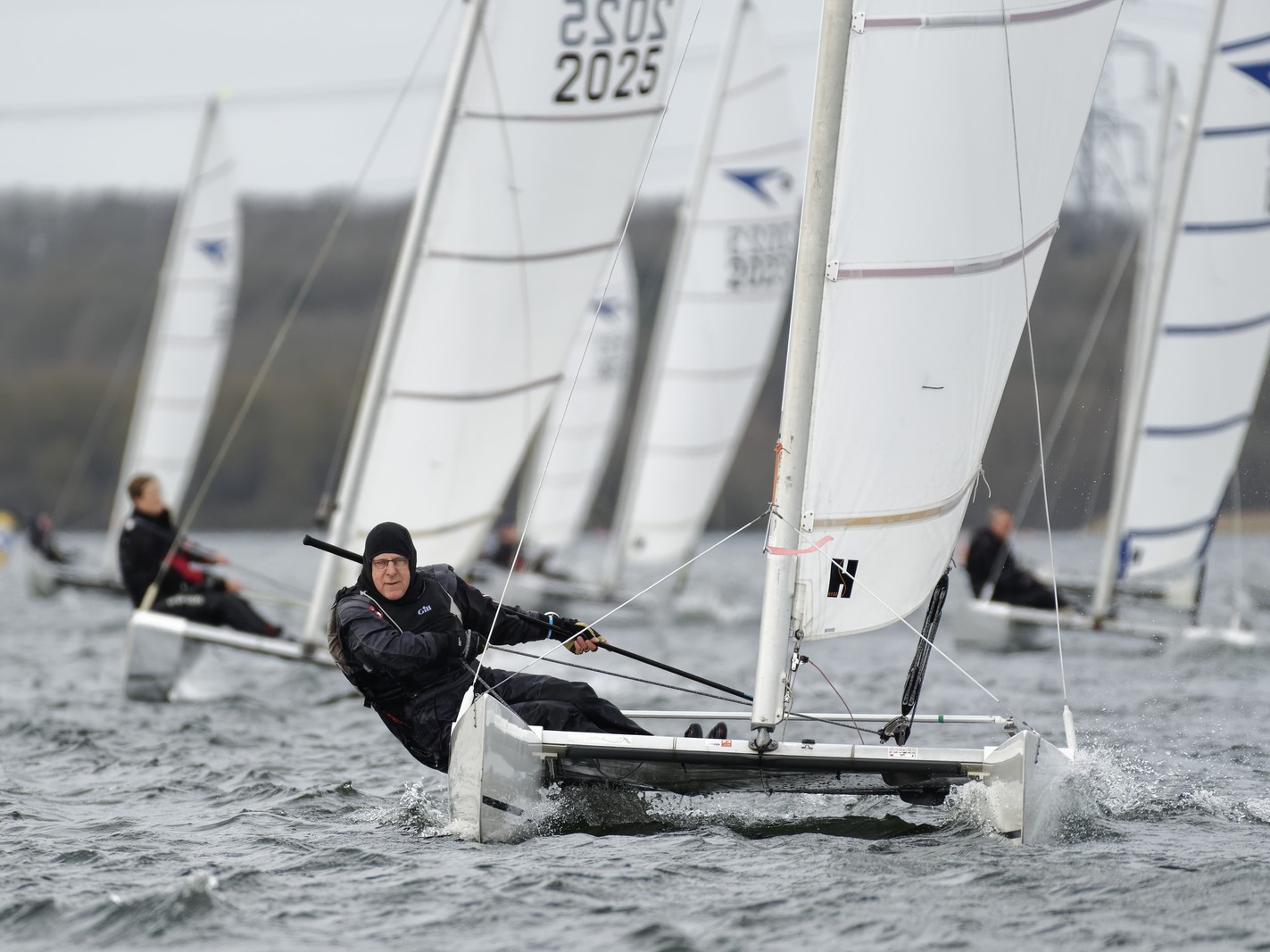 A bright day and moderate breeze greeted the 16 boats competing for the Chris Black memorial trophy in the Gill Sprint 15 Winter TT.

With the southerly wind forecast to swing to the East, Race Officer Nigel Denchfield,  anchored the committee boat close to the Northern shore to set the Sprint 15 square course alongside Grafham’s club racing marks.  Four Yellow/Orange pillar buoys identified the course for the  Sprint 15’s to navigate over 3 back-to-back races.

Race 1 set off promptly and the Sprint 15’s were first away having been promoted above the club sailors for the day.  The wind was Southerly which meant the beat remained quite central and as the fleet got off the line Mark Aldridge in 66 was first around the windward mark closely followed by Steve Sawford (1989) and Jenny Ball (2025), Paul Craft (1982), Stuart Snell (2022) and Ed Tuite Dalton (2023).

The top reach was square and sufficiently away from the South shore to give uninterrupted wind onto the run down to the leeward mark.  Aldridge took an early gybe to keep an inside line downwind as did Sawford, however J.Ball went further out to try and find some extra pressure.  The bottom reach was quite broad and heading up around mark 3 enabled the line to be fetched on port tack, so one less tack on the 2nd beat saw the positions up front remain the same for lap 2.

However, in lap 3 Sawford took Aldridge on the beat having gone left where Aldridge picked a more central line through the club Laser fleet.  This wasn’t the fastest course and Sawford rounded the windward mark in the lead.  Aldridge managed to get in front of Sawford on the 3rd run and lead over the line into lap 4 with J.Ball in 3rd, Craft in 4th and Tuite Dalton 5th.  Sawford then proceeded to sail away from Aldridge in a stellar performance. J.Ball also overtook Aldridge who was taking on water due to a lost port hatch cover and going slower and slower.  Race 1 finished with Sawford victorious, J.Ball 2nd, Aldridge listing 3rd, Craft 4th, Tuite Dalton 5th and D.Ball 6th.

Between races, Aldridge called upon a safety RIB to try to source a hatch cover, but to no avail so it was an early bath for number 66.

In race 2, Craft was first around the windward mark, followed by J.Ball, D.Ball, Tuite Dalton and Sawford which is where the positions remained on to the second lap.  Sawford and D.Ball went off to the left side of the beat as the other leaders stayed on the right side. This made little difference to Craft who was starting to extend his lead quite considerably followed by Tuite Dalton, D.Ball, J.Ball and Sawford onto lap 3.  Over the line after 3 laps by some considerable margin was a lonely Craft, Tuite Dalton, J.Ball, Sawford, D.Ball and young gun Jason Clarke getting some better boat speed.

Race 3 got underway with reduced pressure and a slight swing to the East.  Clarke was now dialled in and in pole position off the line. J.Ball tacked off to try the right side of the beat which did not pay with race 2 winner Craft also tacking off a little further up that leg to no avail.  At the windward mark it was Clarke in the lead which proved to be a good safe position as Elfring crash-tacked to round mark 1. This didn’t quite go to plan and he capsized on top of Sandells who was having his best race of the day until that point.  Craft, in avoiding the carnage caught the buoy and did his penalty turn.

As the fleet came around to lap 2, Clarke and D.Ball were battling it out swapping positions although it was Clarke who rounded mark 1 first, then D.Ball, Snell, Craft and J.Ball.  Lap 3 saw Clarke keeping his lead despite various manoeuvres around the course by D.Ball, sister J.Ball, Snell, Craft and Sawford and race 3 concluded the day’s racing with Jamie Clarke victorious.

It’s great to see the fleet youngsters doing well and winning races. Congratulations to Jason who worked hard for his win after been pushing the fleet hard recently. Note that all 3 races were won with the ‘older’ boats, so no matter how new your boat or equipment it’s the nut on the tiller that’s the important part. Do remember to put you hatch covers on properly!

Thank you to all visiting boats, club sailors, our race committee, GWSC safety fleet and shore staff in making this an excellent event.