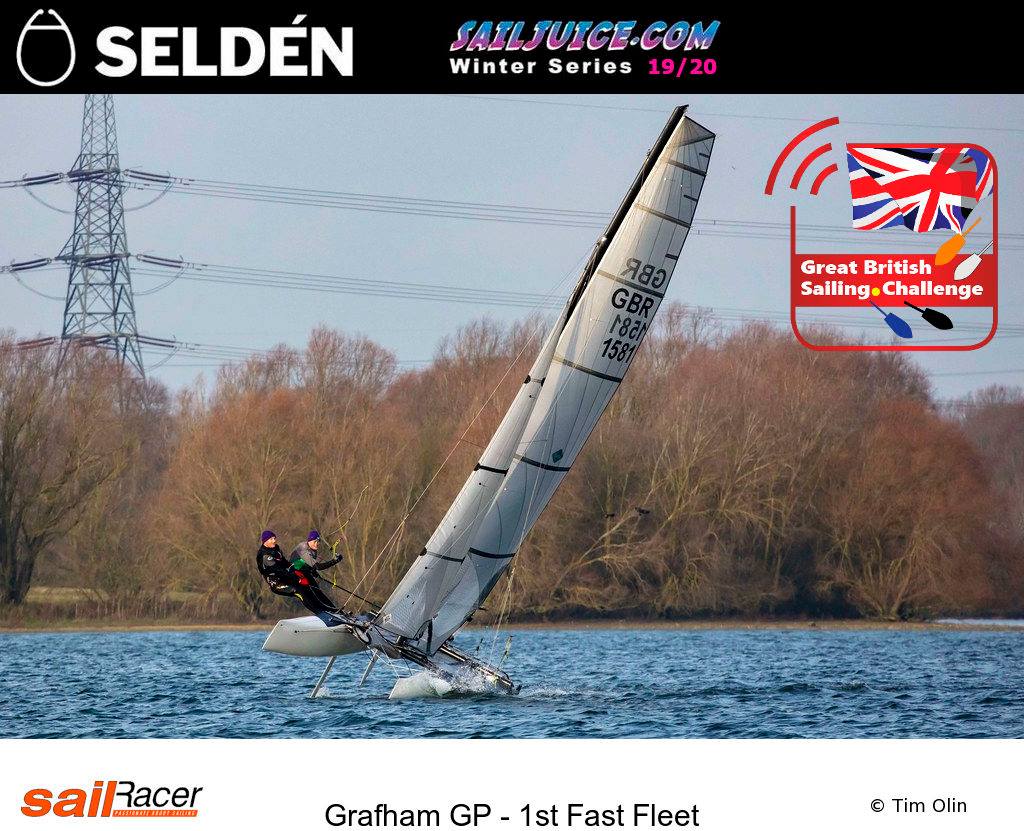 Wind for the day was generally a benign South Westerly of around 10-14 knots, and the sun was shining!  Three back to back races were sailed for each fleet.  The Fast fleet sailed an upwind/downwind course, whilst the other two fleets each sailed trapezoids.

For the first time in this event there was live tracking, provided by Simon Lovesey’s SailRacer.  Throughout the racing, screens in the clubhouse showed separate tracks for each  of the three fleets, with real time calculations of race positions.

The Fast Fleet behaved well without any general recalls and had completed their three races by 1:45.  The first race started in 8 to 10 knots of wind; the Cats revelling in these conditions and trapezing upwind and flying downwind, filling the first three places.  This pattern was repeated in Race 2.  Race 3 started in lighter breeze which favoured the monohulls who were close behind the Cats on the water after Lap 1.  RS400s filled the first two places; Michael Sims and Mark Lunn followed by Steve and Sarah Cockerill, with Peter Purkiss third in his RS700.  Grafham members were in the first three boats overall: David White and Jon Sweet were overall winners (for the third year), followed by John Tuckwell and Will Smith in second place and Paul and Mike Allen in third.

The Medium Fleet started their first race in about 7-8 knots and were away first time.  The wind built quickly to around 14 knots, with the leading boats completing laps in around 11 minutes.  Winner was the Osprey of Eden Hyland and Mark Hartley, with Andy Couch second in a Phantom.  In the second race the fleet was more enthusiastic at the start with two boats BFD.  RS600s filled the first two places, Chris Haslam followed by Richard Smith.  The fleet’s over enthusiasm continued into the third race with a general recall.  After a postponed second start due to a major windshift, the race got away at the third attempt.

Winner was Arran Holman in a D Zero, from Simon Hawkes in a K1.  Overall winner of the Medium Fleet was Arran Holman, followed by the Osprey of Eden Hyland and Mark Harley with Chris Haslam third. It was great to see such a variety of classes at the front of the fleet and there was competitive racing throughout the day.

In the Slow Fleet, Race 1 was sailed in a shifty 8 to 10 knot breeze.  With 81 boats clear wind became a priority.  The 2000 of Simon Horsfield and Katie Burridge emerged from the melee to lead at the windward mark and extended their lead through the rest of the race.  A good mix of boats occupied the top spots.  Race 2 followed a similar pattern, with Horsfield and Burridge again winning, this time from the Aero 7 of Tim Hire.  The course was relaid for Race 3 for lighter wind and the fleet responded with aggressive pushing of the line resulting in two general recalls and several boats BFD.  GP14s took the first two places followed by the consistent Tim Hire.  Overall winners were Simon Horsfield and Katie Burridge, with Tim Hire in second place and Peter Gray and Richard Pepperdine third in their GP14.

After the racing competitors enjoyed seasonal mulled wine and mince pies in the Café prior to the prize giving.

The Grand Prix is a major event in the Grafham calendar and relies on the support of volunteers to run it successfully.  A big thank you to everybody who gave up their time to help: Committee Boat teams, RIB crew, and the onshore teams looking after car parking, tractor marshalling and shrimp wash.