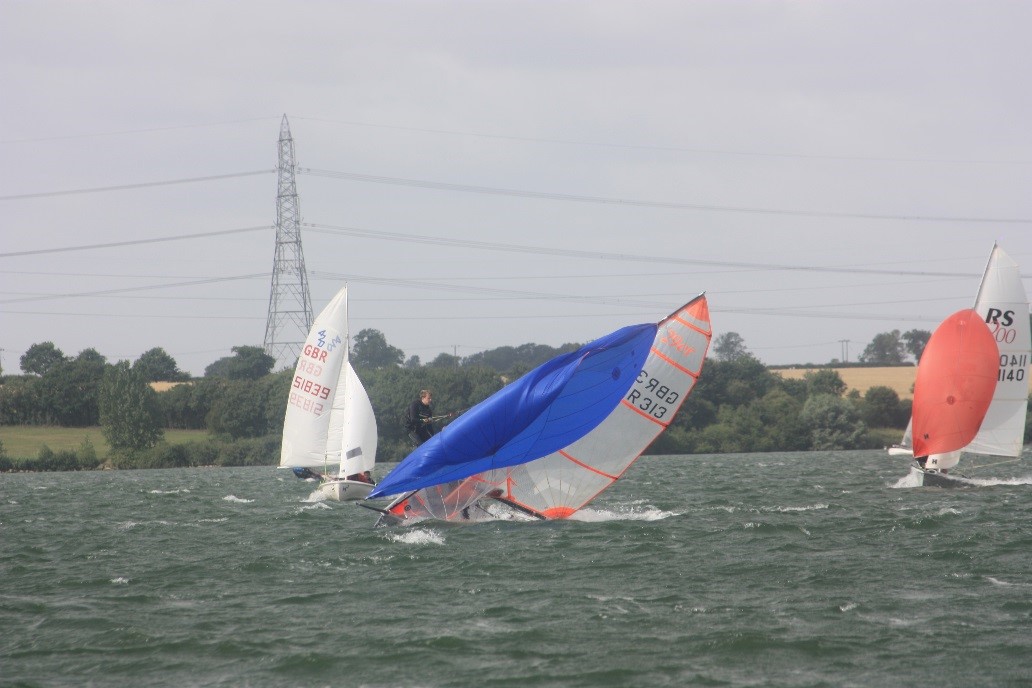 Last week (24th-28th July), in conjunction with CSYSA and the Grafham Water Centre, we hosted the NSSA National Youth Regatta at Grafham.  Over three hundred competitors entered from 17 different teams, with the largest representation from our own Cambridgeshire.  Conditions over the week were testing: a cold, fresh North Westerly greeted the competitors on Monday, and the week concluded with strong winds gusting over 20 knots on Friday.  This notwithstanding, the fleets on all four courses completed a full programme over the course of the week.

To support this event required a huge volunteer force – around 100 helped over the course of the week with a large number of these from our own Club.

Peter Saxton did a superlative job as Principal Race Officer, and David McNamee worked tirelessly all week (and for many weeks leading up to the event) in his multiple role as Event Safety Officer and chief rib co-ordinator.  Others to mention are the Course Race officers (Simon Dabson, Peter Baldwin, Tom Rusbridge and Gordy Baines) and their teams, our coxswains for the week (Andy Taylor and Matt French), the results team in the Office (Heather, Holly and Anna), the mark laying teams and safety boat teams, and Lisa and her team in the kitchen.  Thanks to everyone involved

Feedback from competitors and others during and after the event has been very positive and, as a Club we should be proud of our role in putting on this event.  Here’s to the next one!!

Our own Club members, representing Team Cambridgeshire, had some great successes through the week bringing home silverware in various categories:

Abi Clarke and Will Smith finished a very respectable 3rd in the Fast Handicap fleet: well done to these two who just keep excelling with their sailing careers, who knows what’s next for them.

The Clarke family should be extremely proud as younger brother James came home with 1st Under 12 of the Regatta, winning in his Topper.  James has only been sailing a few years, with his sailing career first starting under the watchful eye of our very own Gordy Baines through the RYA’s OnBoard scheme.  James has progressed so well and so quickly that he is now a regular member at the Club, attending many of the training sessions we run through our Training Centre.

Lizzie Cattermole was crew of the 420 placed second in the medium handicap.  Jon Sweet took time off from his team manager and volunteer duties to finish second in the All Comers Pursuit Race.

Tom King-Venables won a place in the High Flyers Week at the ASSF Weymouth in August, awarded to sailors of particular potential.  We wish him lots of luck and fun in Weymouth.

In addition to those mentioned congratulations to all the others from Grafham who took part.  To have so many young Grafham members doing so well is really encouraging for the future of the Club as it continues to help and teach all the younger generation.  Team Grafham on Saturday afternoons is a key part of helping and encouraging the younger generation and goes from strength to strength