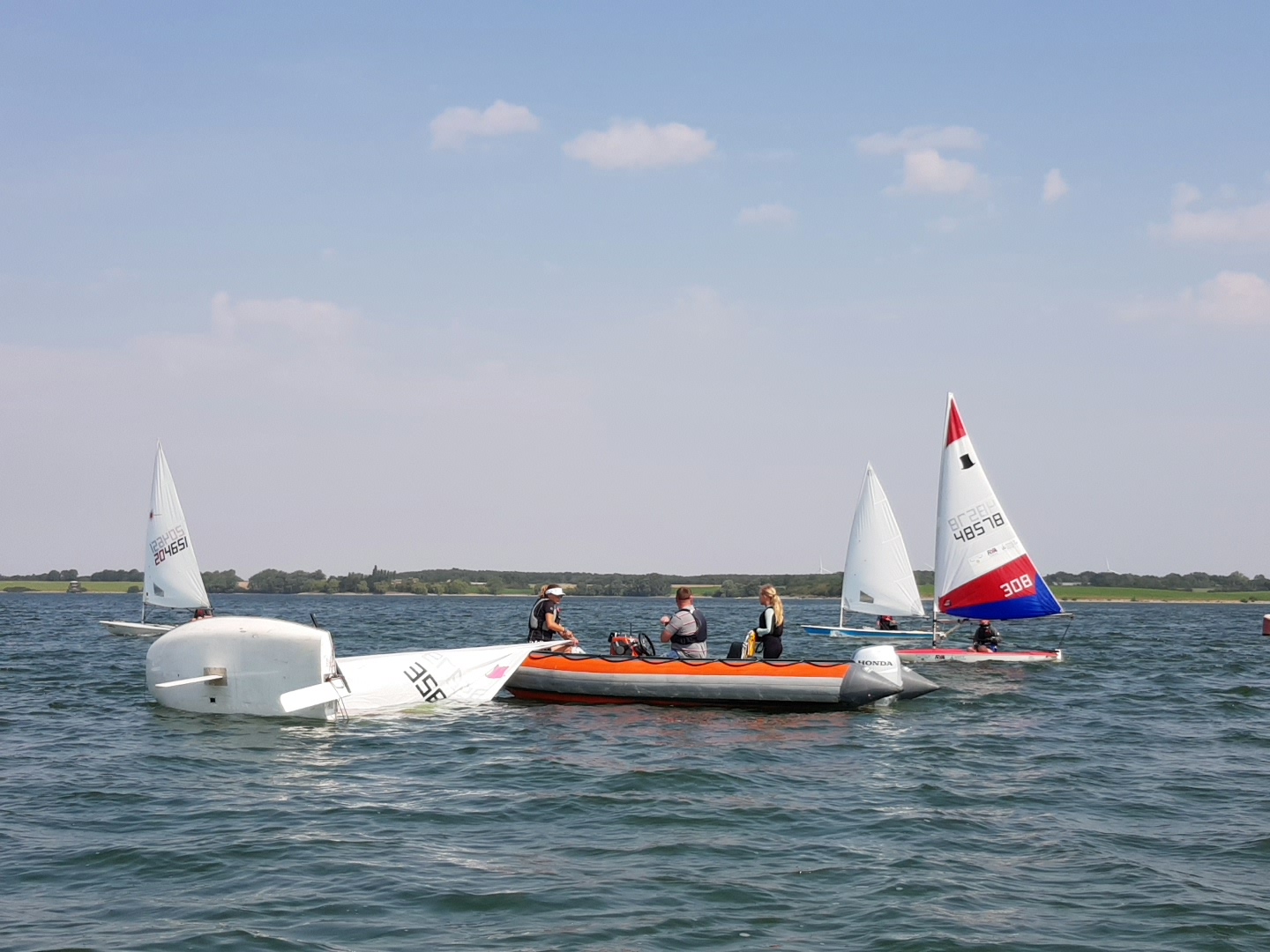 A month ago we didn’t think we’d be able to run this year’s Youth Summer Camp. But then the government allowed camp sites to reopen and we went into planning overdrive to try to work out what it would be possible to do. As with everything we have been doing at the club during the Coronavirus crisis, we decided to follow the principle of baby steps and not try to be too ambitious.

We agreed to limit the number of participants to 12, which with three instructors gives a very conservative ratio of 1 instructor to 4 participants. We also decided to treat the camping aspect of the week as a test of what it is possible to do with camping under the current restrictions. So we have a total of four families, plus Mandy and Matt and his family part time on the camp site.

On Monday morning there was a detailed safety briefing to remind everyone of the social distancing and other guidelines and to check everyone had a face mask to wear inside the building. Your special correspondent was out in the media boat to capture photos and videos as the week progresses.

Then it was on to the main event: the activities. Monday morning saw the ‘Tour de Grafham’. Like the cycling Tour de France, this was made up of stages, sailed from one buoy to the next on the route. The winner of the first stage from X to J had to start the second stage last, and the last person started first, with everyone in between in reverse order. This carried on through all the stages, until the final stage from Rose to X. Directeur Sportif Ben Giles ensured that everyone got underway at the right time in each stage.

Adele Wiggins arrived late (perhaps her team bus had broken down) and had to time-trial back to the Peloton with only a RIB for support. As it was all uphill (upwind) this was very hard going and she did well to catch up with the Peloton by Grafham buoy. Several stages included King of the Mountains (polka dot jersey) points awarded for dry capsizes, with Sam Froome being the holder after the final stage. The green (sprints) jersey was won by Findlay Cavendish and the holder of the yellow jersey as overall winner was Josh Thomas. Chapeaux to all the competitors who did very well sailing almost twice round the whole lake.

After lunch it was time for the first of the world-famous Squidditch (© Matt French Enterprises Inc.) matches of the week. Squidditch is based on Quidditch (of Harry Potter fame)  but is much better as it takes place on water not in the air. Each team of 5 boats had to try to get the squaffle through their goal, but no-one is allowed to hold the squaffle for more that 5 seconds before passing it to another team member. It is very challenging and a very good test of boat handling and manouevering skills and all did extremely well. The match was won by the Elliegiraffarats. Here is a video of part of the action.

As a thunder storm was approaching, everyone came ashore and played a game of sailing pictionary, where one member from each team has to draw a sailing term on the white board and the rest of the team have to guess what it is. Again this was won decisively by the Elliegiraffarats.

Tuesday morning’s main event was The Crystal Maze. It was unfortunate that this was lost on the group, none of whom had ever watched the TV show, but Matt gamely ploughed on anyway. The lake was divided into four zones: Arid, Amazon, Arctic and Aztec. Within each zone at least one team member had to visit each buoy and collect the letters that were stuck on them. Then it was a matter of assembling all the collected letters to make four words to answer the clues. The wind was extremely light, meaning only three zones were completed before lunch and several boats had to be towed back from the far side of the lake. Click to see a demonstration by Adele of Topper no-wind technique.

After lunch the wind was looking more promising and the final zone was quickly completed. After a break for squash and cakes it was time for the second Squidditch match of the week, but this time with a difference. No boats this time but paddleboards, without paddles so it was necessary to either lie or kneel on the board to move forwards (or backwards). This was even more challenging (and exhausting) than the sailing version.and everyone came ashore exhausted. Mandy and Ben were happy to be team leaders and get a chance to cool down from the extreme heat in the water. Here is the video of some of the action:

Tuesday’s events were both won by the Hippocrocopigs.

As there was very little wind on Wednesday morning, the activities were a mixture of land based and paddleboarding games.Yet again Matt was disappointed that none of the participants had heard of the TV show on which it was based – the Krypton Factor. Undaunted, he and Mandy briefed the teams about the activities. First it was a race where each team had to derig a Pico into 5 components, take the parts round a race track while hopping on one leg and then reassemble them. Next came a paddleboard relay race. Each team member had to paddle round a course with a bucket of water on the front. The winners were the ones who had most water left in the bucket at the end. The Elliegiraffarats quickly realised that most spillage happened when getting on and off the board, so one person was detailed to hold the bucket while the change-over took place. Once the Hippocrocopigs noticed they too adopted this tactic.

Next was a scavenger hunt on land, where the teams had to find a variety of objects and put them in the team’s bucket. When the object was ‘something pink’ Skye’s hat was quickly in the bucket, while the Elliegiraffarats tried to stuff Elsa, who was wearing a pink top, into their team bucket. Then it was back to the water (as it was so hot everyone was very glad about this) for a relay race where each team member in turn had to paddle three paddleboards round a course. The Hippocrocopigs tied all three boards in a line, while the Elliegiraffarats tried stacking all three on top of each other – this proved to be very unstable. In the end both teams came up with the best tactic of stacking two boards and towing them behind the third one.

Back on land for a treasure hunt, following cryptic clues to go from one place to another until the final clue was to find a Flag Officer. None of the teams knew what such a creature was, so unsuccessfully variously guessed Andy and Alex. There was a logic to this as they are responsible for putting the flags up and down. However. Matt explained the club Flag Officer structure of Commodore, Vice-Commodore and Rear-Commodore and it transpired that one of the Rear-Commodores was sitting outside the clubhouse with a club burgee tied to her waist. The last activity was another paddleboard relay, this time paddling a ball out to a buoy and putting it in a bucket then paddling back, the next team member paddling out to bring the ball back, and so on, until after everyone had had a turn the ball was back on land.

At the end of the Krypton Factor the two teams were equal on points.

During the course of the morning’s activities, Alex and Callum had spotted a large injured bird in the dinghy park. Very sensibly they told Mandy and she saw it was a bird of prey that seemed to have damaged its back. Andy rang the Raptor centre near St Ives who told him to put it in a box with some water and take it to the centre. Club member Ian Walters very kindly drove the bird there and was given a tour of the centre while the bird was examined. It turned out it was a young Sparrowhawk who had dislocated its pelvis and they were very hopeful that they would be able to fix it, so we hope it has made a full recovery. Very well done to Callum and Alex for their thoughtfulness.

After lunch there was enough wind to go sailing, and Team Racing was the order of the day. Matt and Mandy explained some of the tactics to use to make sure your team wins, as it’s not just about coming first, you have to try to help your slower team members. As we were short of time, squash and cakes was served on the water and everyone showed great seamanship skills by coming alongside the RIBs to collect and return their cups of squash. After four races, the teams were again tied, so the day’s winners came down to the last race, and it was won by the Elliegiraffarats.

On Thursday, again the coaches had a fiendish set of challenges planned, but this was to no avail as there were thunderstorms around us all morning. Instead some socially distanced theory games were played, including Knot Bingo, Taming the Timeline and a flag quiz. Everyone did really well and by the end all could tie a bowline. By 3 o’clock the storms had finally passed, but it was too windy for the planned windsurfing activity. Instead the boats were set to reaching between buoys X and C, and then having to go between or around or in a complete circle around the RIBs.

Friday dawned with much better weather and so we were very glad to be able to run the traditional end-of-camp regatta. This consisted of three races, started and finished using proper flags, sound signals and timings to work out the overall results. The racing was incredibly close, with the top three places taken by Dom, Adele and Josh. After lunch the wind was just right for windsurfing, so everyone had a chance to have a go. Then it was time for the final prize-giving, packing up and looking forward to next year.

We are so happy that we were able to run a successful camp despite the current circumstances, and hope to be able to be back to normal next year.

Many thanks indeed to Matt, Mandy and Ben Giles for instructing the week and to Alex who ran around onshore and on the water, dropping dan buoys, finding buckets, carrying paddle-boards and generally keeping everything moving.