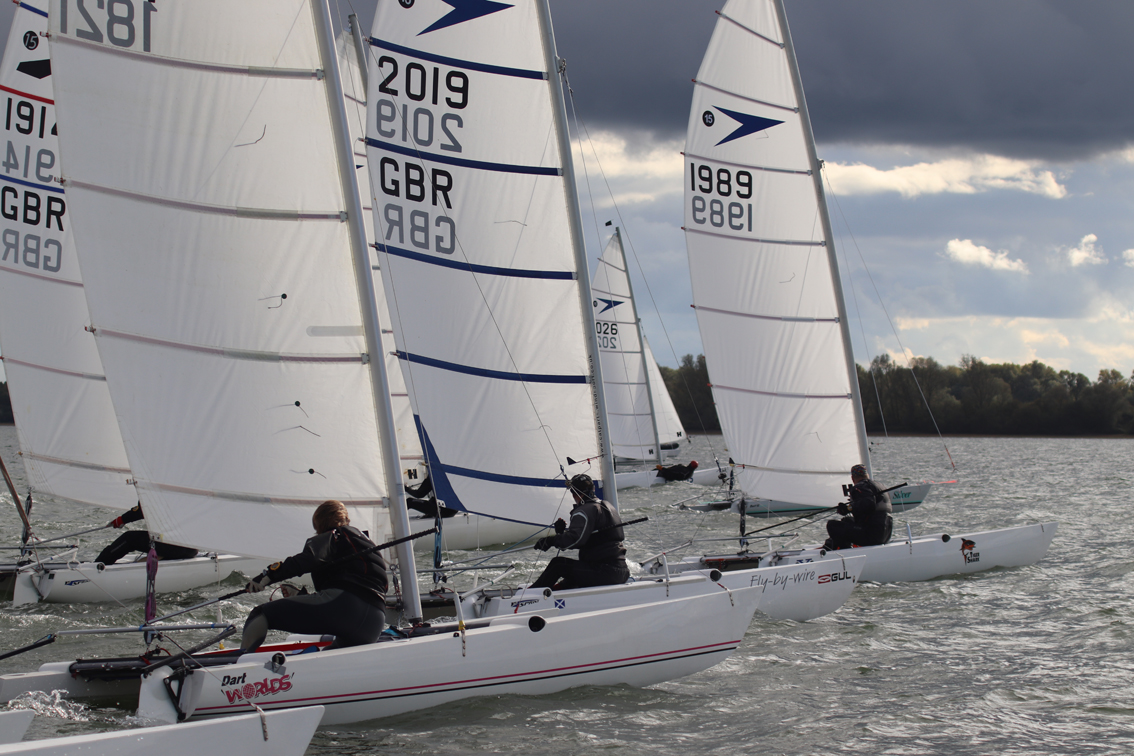 The 2019 Grafham Cat Open took place over the weekend of 19th & 20th of October. For once the weather gods supplied us with a lovely bright day with a nice force 3-4 from the SW on the Saturday and slightly less wind on the Sunday but from a northerly direction which made the temperature  a few degrees less.

There were two race courses with two starts in each. Fast single handers and fast double sailed a upwind-downwind course and the Sprint 15 and handicap fleets sailed a trapezoid course. 83 boats had entered the event with a great turnout of 20 Grafham cat fleet members taking part.

The race officers, Peter Saxton and Nigel Denchfield showed Grafham at its best with great courses and a quick turn around. After sailing on the Saturday a meal was put on for all who entered which was really needed after a hard day’s sailing .

Sunday dawned and we were early on the water, ready for the next three races back to back. The start line was a sight to behold with 13 A classes fighting to get the best start. We had sailing royalty in the A class with Paul Larson the world’s fastest sailor showing how to foil an A class cat up and down the course, theses guys have at last got the hang of keeping the boat up on the foils and look very impressive as they fly past you at twice the speed .

The fast double handers had some cutting edge F18s and a pink Nacra carbon 20 which you could not miss on the race track. The spitfire wing of our club was well represented with 5 pairs all doing well.

The Sprint 15 fleet again had our own royalty with Stuart Snell leading the way and Duke of Edinburgh club Champion Mark Aldridge hot on his heels.

The handicap fleet had Gerry Reeve leading the charge against the Catapult fleet and if anybody has tried to beat this lot it’s not easy; they are all old boys who know what they are doing and a Catapult makes an A class look like an oil tanker, so down wind they just go like the clappers.

So at the end of the day there were no losers as everybody had a great time on and off the water however the winners for this year are:

Everybody had a great time and it’s days like this that make one feel proud to be a member of the best sailing club in the UK. Well done Grafham!!