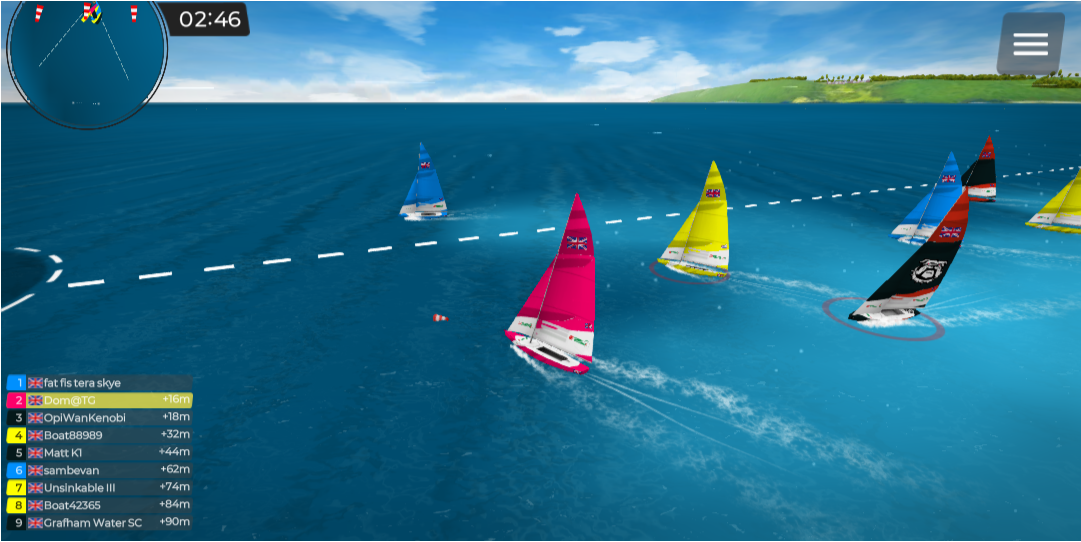 Following the popularity of eSailing before we could do real sailing, Virtual Regatta is returning to GWSC on Wednesday evenings in November and December.

eSailing fleet captain and RYA Eastern Region eSailing champion James Curtis is running eight four-race mini regattas from 4th November to 23rd December, with the placing on the night being the points carried in the series and the best 5 of 8 to count. The first race will be at 20:00 each week.

The event will be organised on the new WhatsApp group which you should join if you want to compete: A reminder of the link to Virtual Regatta.

Week one kicked off on the 4/11 with four races in the J-70 class, it was best three to count so there was a bit of leeway for mistakes but only if you could count on your internet connection to hold out.
Race one started with a left shift on the course that allowed James Curtis to cross the fleet on port from the pin with the rest staying close together on the long upwind. Jon Quick and Colin Glover tussled the whole way round in 2nd and 3rd with a penalty being exchanged on the first downwind. At the end it was Curtis, Quick, Glover with hardly any time separating the rest and only a tenth of a second between Catherine Joce and Peter Gutteridge at the finish.

Race two was a similar story to the first with James Curtis jumping away up front and little to separate those behind. Simon Kitchen turned his 4th in the first race into a 2nd this time being chased home by Jon, Colin and Ian Hayhoe.

In race three Jon managed to keep ahead of Simon and Colin with Peter G jumping in to the battle as the wind got shifier.

While the fourth race wasn’t needed to work out the winner for the night it was by no means a dead rubber with Abigail Hooper who has missed the first two races keen to make an impact. The wind was in a right phase as the start went with James and Jon battling at the committee boat and tacking off as the wind went left. Half the fleet however had seen the pressure on the left and continued straight with Abigail leading this bunch out left. With more separation up the beat than we had seen in the previous races it was all to play for as the two sides tacked back towards the top mark. As the fleet neared the top, the left bunch got a nice lift in which gave Abigail a 20m lead around the top with James and Jon pinching to make the buoy.

Down the run the two J’s gybed out the right going for the pressure on that side and covering each other while Abigail kept her air clean and sailed fast for the bottom of the track. At the gate they split with Abigail and Jon taking the left gate and James taking the right and the small gain from the shift that they were in. As they got close half way up the work, James had pulled into Abigail’s lead and Jon had dropped off the back but was by no means out of it. James then tacked off left again then and picked a lane under the port layline, this worked out for him as the left shift came in but not enough to be able to cross and tack at the mark forcing him to duck and follow round. As they went onto the run it was nip and tuck with gybes to cover and get away all the time with James slowly catching up and Jon ready to pounce on anyone who picked up a  penalty.

With 100m to go James made the final gybe to line, Abigail’s lead was two meters and it was going to come down to fractions of a second with the winner anyone’s guess. But then disaster Abigail didn’t gybe and her boat disappeared. A victim of a dodgy server or something more sinister?? the conspiracy theorists will be all over it.

The results from night are James in First followed by Jon Quick in Second and Simon Kitchen Completing the podium in Third.

Well Sailed to all and we’ll see you next week in the 49er where we will see if anyone can take a race off James without disconnecting!