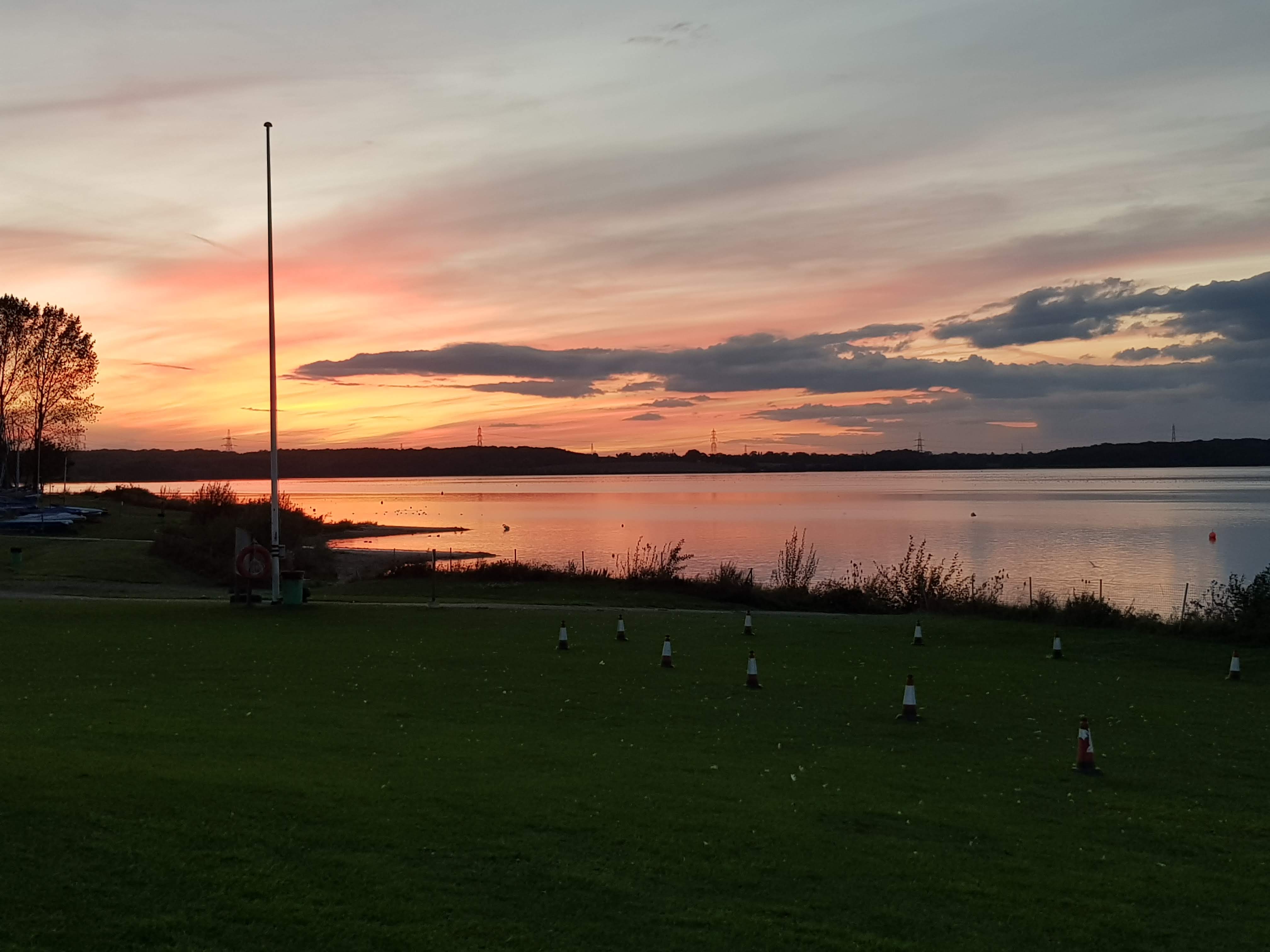 The final Wednesday afternoon session slotted nicely into a quiet bit of wind following a torrential downpour. Some gusts made for interesting moments, especially on the short run from the downwind start to the gybe mark. The short sharp gusts created swimming opportunities that were grasped readily by most of the racers, and at the end of the 5 races Catherine headed that leader board.

Simon Wigmore and David Williams joined the group today, but halliard failure in race 3 robbed Simon of a full set of results. However, he did finish race 1 by sailing under the rainbow.

The start of race 4 was the best, when Mandy and Matt decided that their 11 youth sailors should join in. Unfortunately this was not immediately apparent to the Wednesday group who found 11 Toppers, 4.7s, Radials and a Tera milling aggressively around the short start line. Spectator joy was the result. Race 5 saw a close finish when in the last 100 yards Catherine romped up from behind Peter, nicked his wind, and sailed past on the line.

Thanks are due to Barrie and Ann who braved the cold to run the racing, Ann has been there most weeks.

This activity will return next year, once the water has lost the winter chill.

It was only right that on Trafalgar Day we would not let a little bit of rain prevent sailing.

Seven boats turned out and enjoyed a force 2/3 breeze for some hectic action in 5 two lap races. The starts were entertaining as was the shifty beat along the shore culminating in a starboard rounding of the windward mark.

Navigating a simple 3 Mark course proved a tough ask for some, and I won’t name the ones who failed to sail through the start finish line each lap, but both Peters and Jason should book trips to Specsavers. Jason found a novel way of finishing one race at the shore end of the line. Anchored by his dagger board, he got out of the boat and walked it across the line. A big thank you to Chris, Lynn and Ann who made it happen for us.

Next week, we shall be back on GMT (boo hiss) so for the final session this year will be starting at 1:30pm. Then we switch to the eSailing as advertised on the Club website.

The Wednesday afternoon session has proved to be a reasonable idea, even though we haven’t had many of the gorgeous sunny afternoons (quiz question: which group had a big hit with Sunny Afternoon ?) promised. We intend keeping going until the end of October.  Next week, Chris Clarke will be the starter.

Race one dissolved into farce when all 5 managed to sail a mixture of courses, none of which was the correct one. After that races were hard fought, especially around the windward mark. Barrie and Peter G ended level on points, followed by Richard, Jason and Ashley. These short courses are far from ideal for cats, but do give useful boat handling practice on congested courses.

Next week we start at 1430. A volunteer for starting and finishing is needed please.

30th September racing was cancelled due to bad weather.

Wednesday afternoon racing continued today with the forecast predicting a window of good weather at the right time. Of course, forecasts are really accurate. Six boats turned out, 2 Lasers [Barrie and Pete G], 2 Radials [Chris and Catherine], a Lark [Nigel and Fiona] and the DX cat [Ashley]. Ashore, Richard, Ann and the other Peter G were race control.

Very tight courses along the shore were used, and the racing was close. Full marks go to Ashley for taking part because it certainly didn’t suit a cat, especially when the wind picked up. Race one saw a lot of place changing as the wind puffed and shifted. Barrie decided to anticipate the rain by getting thoroughly soaked with a bit of a swim. Catherine found a nice gust on the last leg and simply zoomed past Barrie and the Lark pair.

The very low, very black clouds that gathered during race 1 now revealed their true intentions, buckets of rain and a big squall blew in for all of race 2. Chris went for a brave port tack start, and so nearly pulled it off, but had to back out. The run down the shore allowed the now very wet shore team to admire our running skills as the wind caused us to aim towards the jetties to reach the mooring buoy that was the leeward mark.

Race 3 was in calmer conditions, and this time the Lark managed to achieve a port tack cross on the start and stayed just ahead for the whole race with Barrie very close behind

A lot of fun was had by all, and the sessions continue next week when Chris will be in charge.  Come if you can, make the most of the opportunity to sail whilst we still can!

After the glories of last week, it was obviously too much to hope for a repeat. This time the weather conspired against us.  XC gave a breezy 16-21mph forecast, but the waves breaking on the shore in the rather brisk NNE wind told a different story. Never mind,  Chris Clarke and Peter Gee were game to have a go. By the time they left the line the wind was in the 22-25kt range, with some bigger gusts just to liven it up. Chris demonstrated the advantages of being able to use a 4.7 rig and led throughout the 1 lap race. The reach was awesome, and he never looked troubled. Meanwhile Peter was experiencing a few issues with a tangled mainsheet and a rudder that refused to stay down, no matter how hard he pulled on the downhaul. If the rope had actually been attached to the rudder, pulling hard might have worked.

Next week Richard and Peter will be the starting team, when hopefully the wind will be more amenable.

Seven enthusiastic sailors arrived for the first of the Wednesday afternoon racing sessions.

Blue sky, bright sunshine, 12-15kt, this is exactly what we wanted.  Three short races, run from the shore were slotted in using exotic marks like ‘that little pink buoy up there’ [a debate on the colour followed], the green yacht up there and mooring buoy just off the jetty as well as nearby club marks.  The aim was to keep the legs short to keep the boats together. Lap times in each race were 10mins, 13 mins and 6 mins, allowing race lengths of 30, 26 and 27 mins.  The start line was from flagpole 1 to a moored yacht, the sequence a simple 3-2-1-GO. No flags, no OCS, just keep it simple. An OCS boat will receive a 1 minute penalty…unless it starts more than 1 minute early, in which case the helm will be keel hauled.

There were battles through the 7 boat fleet, notably between Robbie and Barrie at the front, Richard and Pete in the middle and Colin and Steve further back.

Do come and join us. There is no need to sign on, just meet at flagpole 1 between 2.45pm 3pm for a quick briefing, remaining 2 m apart and no more than 6 at a time.

Lisa and her team are on hand to sell you pre-race cake and tea, so try and arrive in time to take advantage of this. If enough people want to have meals afterwards and let her know beforehand, she can do them. So, come and sail and support our wonderful café team; we would be lost without them.

Next weeks starting team is Barrie and Pete.

Our wonderful lake lies mostly empty on Wednesday afternoons once the evening racing has finished, yet September and October often have terrific weather for sailing.

We have a large number of members who could continue racing on Wednesdays at earlier times.

We are going to hold a fun racing session on Wednesday afternoons during September and October, beginning on September 9th.  This is open to all, and offers a chance for the less experienced to practice those racing skills.

There will be 2 or 3 [depending on demand] approx. 35 minute races.   First start will be at 15.30 preceded by a short briefing at 15.00 [socially distanced of course] at flagpole 2 to set the course and the start line.

The start line will be shore based to reduce the duty team size.

Courses will be small, to keep boats together, with the emphasis on fun – just like the Sociable Saturdays.

Once we get through the first week, participants will be asked to volunteer for duties before taking part in racing.  These will be 1 or 2 people [2 preferred] as starter/finisher team, and 1 or 2 in a RIB [driver needs PB2 qualification].  Nigel Denchfield will organise the duty rota, contact him on ndenchfield@talk21.com.

Lisa will be on hand to sell you tea and cake and if required can do simple meals afterwards.

Do come and join us if you can and keep the club active.