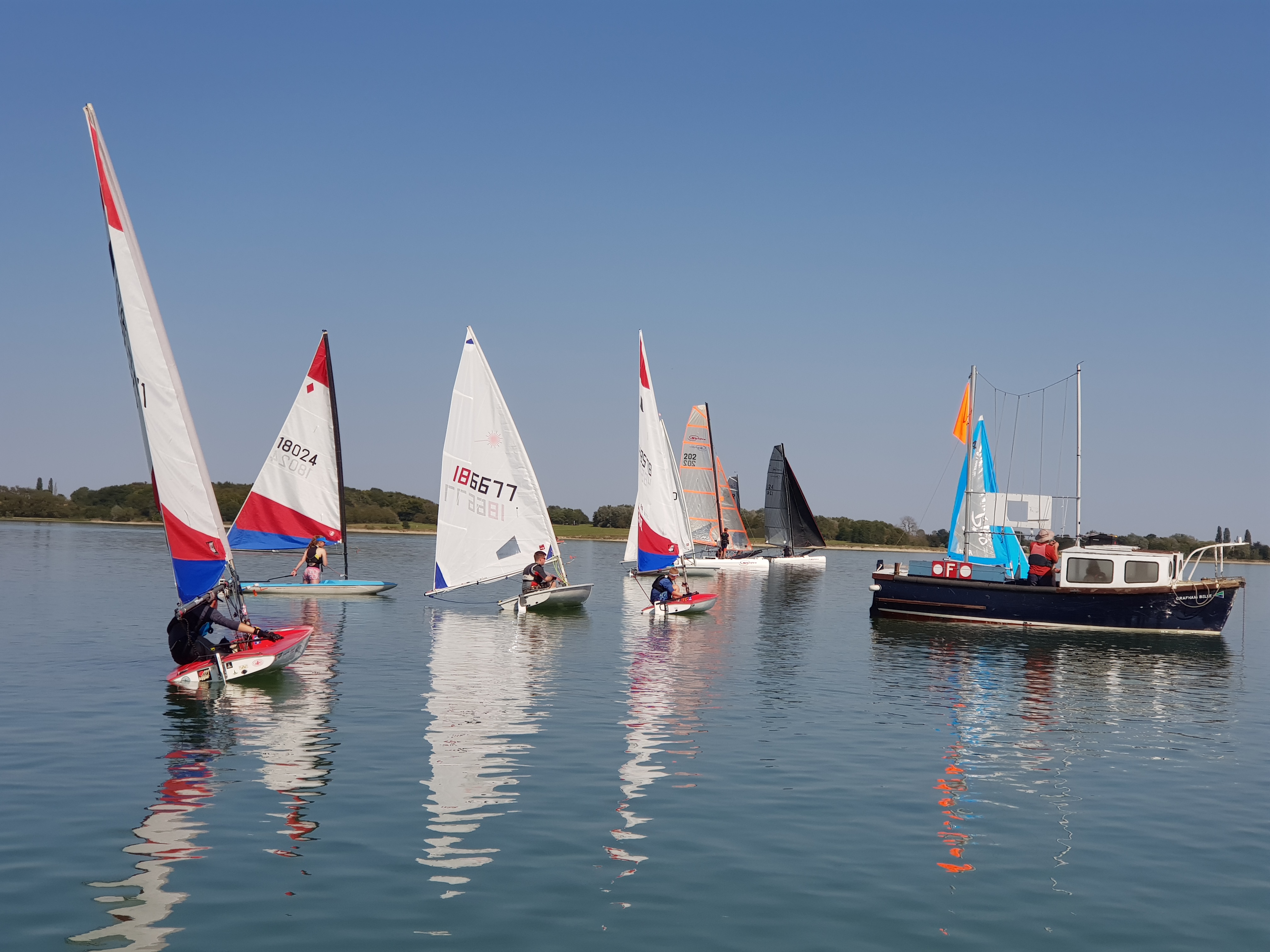 The 2019 Summer Bank Holiday Regatta has been notable for light winds and summer heat. 23 boats ranging from Spitfires through to an RS Tera raced the two Saturday afternoon ‘Sociable’ races. Richard Major and John Aston in Lasers took the top two places. Several of the regular Sociable Saturday (‘cake club’) racers joined the fun with Pete Windsor coming out best with a 5th and 3rd place. It was fantastic to see 9 of Team Grafham join in and Adele scored a very creditable 9th place in the second race.

Sunday dawned with even less wind than Saturday and the two afternoon races were part of the regatta. Again there was a fantastic turn out by Team Grafham. 24 boats competed, taking the total number of competitors so far to 39. There were a few puffs of wind to help the boats on their way, giving Barrie Holden the win in race 3 in a Laser. Nigel and Fiona Denchfield won race 4 in a Lark. After day 2, the leaders are: Richard Major (Laser), John Aston (Laser and D-Zero), Jack Mash (Pico), Dom Atherton (Topper). It was all to play for on Monday with Chief Instructor Matt insisting he would be the victor at the end of the day.

Monday dawned almost airless but 9 boats were rigged and on the start line at 10:30. The Long Distance Race this year ran for 6.5 hours plus, as boats were given a finish as they crossed the start-finish line after 17:00. Team Grafham fielded two teams, one consisting of Lloyd, Adele and Skye who sailed 8 laps in Lloyd’s Topper, finishing in fifth overall, and one in the K6 helmed by Matt or Mandy and crewed by the Team Grafham members, finishing in third overall.

As the day progressed the wind picked up and shifted to a south-easterly direction. As well as the teams competing for the Long Distance prize, those who had sailed over the weekend (or not) sailed laps to compete for the fastest lap award or qualify for the overall result. Stewart Smith, in a Topaz 14, sailed the final lap of the day and walked away with the prize for the fastest lap.

Thanks to John Aston, the race officer (even if he sailed two laps), the safety boat crews who ferried the competitors out to the pontoon for the changeovers and especially to Sara Collard the timekeeper who recorded the lap times as boats finished their laps between flagpole 2 and the outer distance mark, as well as ensuring the safety boats were on hand for ferrying crews to the pontoon.

We were thrilled that more than 40 boats took part in this year’s event.