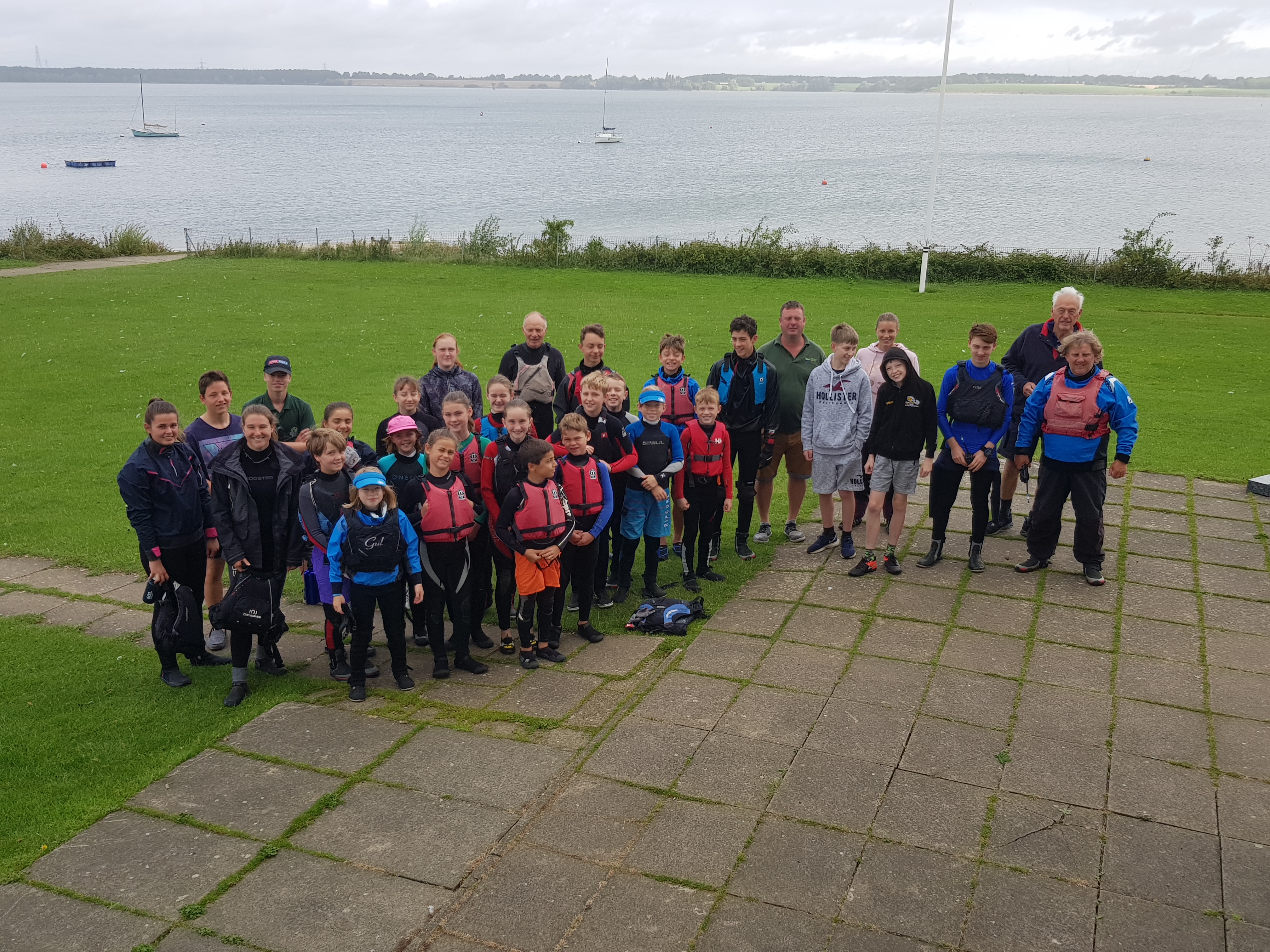 The last day dawned pretty windy, with everyone looking forward to the Regatta with some trepidation. After the briefing and getting the boats ready, the sailors set sail in nine boats. The winners managed three laps  and all finished the race in very challenging conditions.

Once back ashore, it was time for the prize-giving and everyone was given a certificate for their attendance. While the parents took down the camp site, Matt, Mandy, Reece and Abi played manhunt with the kids. Then it was time to say goodbye and look forward to next year.

A gloriously sunny morning and today it’s Cat and 2000 sailing. At 9am the instructor team were busy rigging three Dart 16s and two 2000s.

After the group briefing where Mandy told everyone which groups they would be in, the sailors split for two separate briefings.

Gordy and Stephen explained how sail settings are different on a catamaran (there is a video extract on the club Facebook page @grafhamwatersc).

Matt explained that the tacking technique in a 2000 is different from the single-handers they have been sailing all week while Tara and Abi demonstrated. Then everyone had a chance to practice for themselves.

Once out on the water it was sailing around a course taking it in turns to helm. The 2000 sailors soon discovered that, when tacking, forgetting to pop the top batten or change the side the jib is cleated means you go really slowly.

This afternoon it will be all change so those who were sailing Cats will be in 2000s or the Stratos, and those in dinghies this morning will have their turn in Cats. The plan is to sail right across the lake towards the north-east shore.

A breezy morning greeted the summer campers this morning and ‘big boat sailing’ was on the agenda. While one group were driven out to the Shuttleworth 707 in a RIB the other sailors split into two groups. One group worked on improving their boat handling, while the others did racing practice, including working on starts. A second group also had a go on the 707 before lunch and Matt said some of the sailors were even steering the cruiser. Mandy said that everyone’s sailing has already improved this week.

After lunch the other groups had a chance to go on the cruiser. Meanwhile most of the dinghy sailors did a Tower Dash. This involves sailing from the club shore, round the aeration tower on the north shore and back to the club. The wind got quite strong and Mandy said everyone coped very well.

At the end of the afternoon there was another game of Squidditch which ended in a nil-nil draw.

Another bright morning greeted the sailors who seemed to have recovered from yesterday’s exertions. They gathered in the cafe for a briefing on this morning’s activities. One group were sent off with Tim and Angus for windsurfing, while the others were told about the Treasure Hunt. Matt explained that there are 14 letters attached to buoys on the water and 7 more letters on land. The sailors were put into pairs and sent off to first find all the 14 letters on the water.

Tim demonstrates how to handle the windsurfer rig  while the Picos set off in search of letters.

Once all the letters on the water had been found, the teams lined up to search for the 7 letters on shore. Then it was time to unscramble the letters into a word and a phrase. The word was “Hippocrocapigs”, which apparently are mystical creature that live near the Tower. The phrase was “Course made Good”.

The morning was rounded off with a game of Squidditch. This involved two teams of Picos (light blue sails versus dark blue sails) who had to pass a ball between the boats and then score a goal by sailing between a pair of dan buoys with the ball. The dark blues won and Matt said everyone did really well.

After lunch the final group had their turn windsurfing, while the sailors did a relay race. This involved one boat from each team sailing to the pontoon, putting a tennis ball in the orange bucket, sailing through both Squidditch goals and round X, then back to the pontoon to pick up the ball and return to shore to hand to the next team members.

After this it was How many people can you get on a Pico? Two Picos laden with 8 people each sailed off the beach, round a mooring buoy and back to the beach.

The day ended with a windsurfing lesson for the instructors. Matt, Mandy, Abi, Tara, Nathaniel, Reece and Alex were shown the basics by Angus and then set off with varying degrees of success. It soon became clear who had done it before (mostly Mandy). Matt got tangled up with the pontoon mooring rope and several others had to be helped by Angus in the RIB. A large group of kids assembled to watch proceedings and found it hilarious

Summer Camp 2019 got underway this morning with 21 youngsters joining Matt and his team of instructors and helpers. A bit of early drizzle didn’t put anyone off and by launch time the sun was out.

At 9am Gordy was busy rigging up 6 windsurfers.

The day started with a briefing by Matt where everyone was told what group they were in, who all the instructors are, and the ground rules for the week.

Then it was all outside for a team photo before getting ready to launch.

This morning three of the groups did sailing, while the fourth started with the basics of windsurfing.

Lunch was enjoyed in the cafe and then it was back out on the water with a second group on the windsurfers with Gordy and Tim and the rest sailing round a triangle course. Matt and Mandy were encouraging the young sailors to think about trim, balance, sail and dagger-board settings.