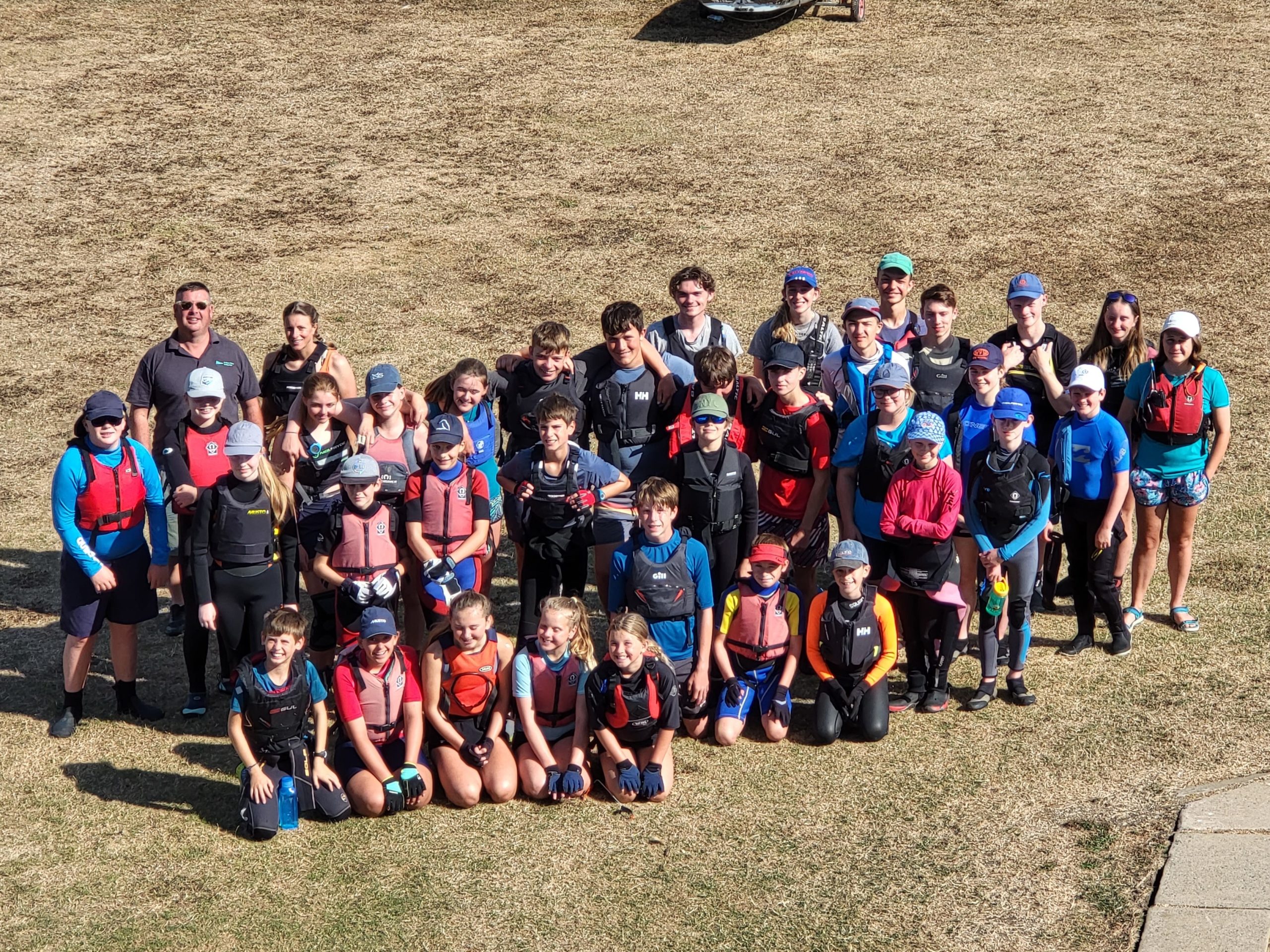 It’s back and it’s bigger and better than ever!

37 young people have gathered at Grafham for the week-long highlight of the summer holidays, under the watchful guidance of coaches Matt and Mandy. Monday dawned hot and sunny, but sadly lacking in the critical requirement for sailing – wind. The participants were divided into four groups and undeterred went afloat in the very light wind. This soon died to nothing and capsize practice was the order of the day. Mid-morning drinks were delivered on the water as it was very important in the hot weather to keep hydrated.

After lunch new groups were formed for the afternoon activities which consist of stand-up paddleboarding, windsurfing (with Angus Jackson providing instruction – many thanks Angus!), sailing games and ‘double hander’ sailing in the clubs’ Stratos and 2000 – one instructor and three to four children in each. The two mega sized paddleboards and two standard sized ones were tied together, providing a platform for relay races and other competitions, which gave everyone a chance to cool down as there was plenty of opportunity for falling off.

Angus remarked on how well everyone got on with their first attempt at windsurfing; this was another activity with plenty of cooling down opportunities. The Stratos could be seen being sailed with people standing on the gunwales and holding onto the trapeze handles on both sides of the boat.

Tuesday dawned with more of the same conditions, but even hotter. There was a bit more wind in the morning so everyone got a chance to practice their light wind sailing techniques. After lunch everyone got an opportunity to try another of the afternoon activities while Matt and Mandy came up with a novel way to keep cool on the safety boat.

On Wednesday the forecast looked more promising and indeed the wind did deliver. The group with Matt and Mandy set out on an expedition to inspect the Aqua Park on the north shore to find out if it would be open on Friday. This was a long beat of about a mile and a lovely run back to shore.

The rest of the sailors practiced sailing triangles close to the beach. After a break onshore for drinks, there was more sailing practice before lunch. Afterwards the wind had done a bit of a disappearing trick again and the afternoon groups tried out their third different activity.

Thursday dawned similar to the previous day, which meant that all the groups got some proper sailing practice in the morning. The groups closest to the shore were doing short course races on triangles off the beach – congratulations to all who managed to win a race! Again the wind was fickle and deserted us after lunch, but undeterred the groups all went afloat for windsurfing, paddleboarding and ‘double hander’ sailing. After a break for squash ashore, Squidditch was the order of the day.

For those who haven’t come across it before, Squidditch (copyright Matt French Enterprises), is the sailing version of Quidditch (of Harry Potter fame). However, for broomsticks substitute water craft! In the event of minimal wind, it was played on paddleboards without paddles. Two teams, with one mega SUP, two standard SUPs and two windsurf boards each, had to try to get the quaffle (a football) to hit the opponents’ goal, while the opposing team were defending and trying to get their own goal. The final score was 2-1 to the team hitting the yellow flag.

Friday had the best wind of the week and it was Regatta Day! Hilary, as Race officer for the regatta, gave a briefing about how the racing would be run and what flags and sound signals would be used. Ten boats set sail, including both 2000s, the Stratos and the Dart 16, all with multiple crews, plus several single-handed Lasers, a Tera and two double-handed Picos (with jibs). Everyone did really well; there were three short races. Congratulations to everyone for getting round the courses in difficult shifty wind conditions, and to Matthew Donley who won, with Zak Myles in second place and Jake Timms in third. After the racing, the prize giving took place, with each instructor nominating their ‘sailor of the week’, and awards to the Endeavour sailors .

That was the end of official Summer Camp, but then it was off to the Aqua Park on the north shore for a subsidised visit thanks to the Aqua Park team. The participants were ferried to the park in the RIBs, so arrived in style and had a great time on the inflatables before coming back to the club by RIB to be presented with their certificates for completing the week.

Huge thank you to the instructors and volunteers who worked so hard. It was a fantastic week and we look forward to seeing you all at Team Grafham and next year!